What are you looking for?

The company's in-house R&D has developed first of its kind anaerobic fermentation process based technology to produce Calcium Lactate. The technology was commercialized on 300 thousand liters fermentation facility.

Lactic acid is a natural organic acid with a long history of food, leather, wood-dyeing, and cosmetic industries. From a long time, lactic acid became commercially available. It was formed by natural fermentation in products such as cheese, yogurt, soy sauce, meat products, pickled vegetables, beer, and wine. Animal and human bodies also produce a significant amount of lactic acid during daily activities such as walking and running. Today, lactic acid and its salts like calcium lactate and sodium lactate are extensively used in food, cosmetic, and pharmaceutical industries. In Prathista lactic acid, calcium lactate, and sodium lactate are available as per IP / BP / USP specifications.

Lactic acid (2-hydroxypropionic acid), CH3-CHOH COOH, is the most widely occurring hydroxycarboxylic acid, having a prime position due to its versatile applications in food, pharmaceutical, cosmetic, textile, leather, and chemical industries. Lactic acid was first found and described in sour milk by the Swedish chemist Karl Wilhelm Scheele in 1780. It was first isolated from sour milk by CW Scheele in 1780 and was first commercially produced in 1881 by CE Avery in Littleton, MA, USA. Pasteur, Lister, and Delbruck identified lactic acid as a microbial metabolite.

Lactic acid is a chiral molecule and has two optical isomers. One is known as L-(+)-lactic acid and other is S-(-)-lactic acid. It is miscible with water or ethanol and is hygroscopic in nature. In animals, L-lactate is constantly produced from pyruvate by the enzyme lactate dehydrogenase (LDH) during normal metabolism and exercise. Its concentration does not increase until the rate of lactate production exceeds the rate of lactate removal. This equilibrium is governed by a number of factors, including monocarboxylate transporters, concentration along with isoform of LDH, and oxidative capacity of the tissues. The concentration of blood lactate is usually 1–2 mmol/L at rest, but can rise over 20 mmol/L during intense exertion.

The carbon source for microbial production of lactic acid can be either sugar in the pure form such as glucose, sucrose, lactose etc. or sugar-containing materials such as molasses, whey, sugarcane bagasse, cassava bagasse, starchy materials from potato, tapioca, wheat, barley, and carrot. The economics of production of lactic acid and its derivatives is dependent on many factors of which the cost of raw material is very significant.

Several approaches have been considered in literature for lactic acid recovery, including solvent extraction and electro dialysis. However, comparatively high amounts of solvents are needed for extraction, and toxic effects are provoked by these solvents. In electrodialysis units, cells adhered to membranes during the process, leading to decreased efficiency in the overall recovery system. In this field, ion exchange separation provides an interesting alternative for lactic acid recovery from solutions having low concentration and complex composition, as in the case of fermentation media.

There are several issues that need to be addressed for the biotechnological production of lactic acid, such as the development of high-performance, lactic acid-producing microorganisms and the lowering of the costs of raw materials and fermentation processes. 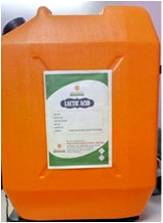 Fermentation of glucose (obtained from corn or soybean or potato) will be performed with the help of Lactobacillus strain produces crude lactic acid. Crude lactic acid is neutralized with respective mineral salt to produce Lactates. The lactate is further regenerated by acidification, filtration, concentration, and decolorization.

Calcium Lactate has significant advantages over other calcium salts including low toxicity, better palatability with texture, higher stability and low astringency. Calcium is an essential element of tissues and blood which contains approximately 10 mg/ 100 mL. The average daily requirement of calcium is 500 mg, however, larger amounts are necessary during the periods of growth, pregnancy, and lactation. Inadequate calcium leads to rickets and imperfect calcification of bones and teeth.

Calcium carbonate applied for neutralization of lactic acid for producing Calcium Lactate. It has high solubility and bio-availability. Therefore it is a preferred choice in calcium deficiency therapies. Calcium Lactate is available in both powdered and granular forms.

In the pharmaceutical (Human medication) industry

In the veterinary pharmaceutical industry

In the food industry

Calcium salt of lactic acid produced from organic raw materials fermentation is called Cheese Lactate. It has basic material of Calcium Lactate derived from organic sources with certifications from Indian organic certifying agencies and OMRI of USA for the first time in the world. This organic salt is widely used all over the world for the production of cheese, panner and other allied milk proteins.

It has sodium lactate (C3H5NaO3) with a molecular weight of 112.06 g/mol. Sodium has a major role in maintaining cell integrity along with potassium. Sodium maintains the proper muscle and nerve functions. Low sodium levels develop hyponatremia condition with symptoms like muscle cramps, headache, restlessness, nausea, fatigue, confusion, hallucinations, decreased consciousness, and coma. Therefore balanced levels of sodium are mandatory for life processes. All feed supplements need to be balanced with sodium addition for making a complete diet.

Based on market requirements, the company can supply any individual mineral lactate salt or in combinations as per customer requirements for Pharma, Food, Veterinary, and Agricultural segments.

The mode of packing may be changed as per the customer requirements on request.
These products have to be stored in a cool dry environment, away from sunlight to ensure the shelf life of 2 - 3 years.